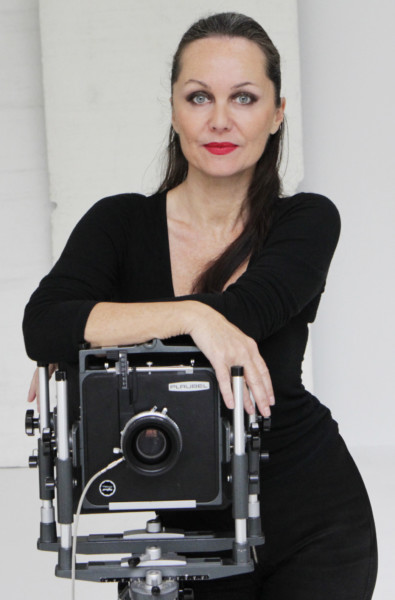 Cathleen Naundorf is a fine art photographer who studied painting and photography. She is specialized in fashion and portrait photography. She works actively with the Haute Couture houses like Chanel, Dior, Elie Saab and Valentino.

Naundorf has travelled extensively since the early ’90s for renowned publishing houses around the world. Specialising in photo reportage and fascinated by ethnic groups, she worked with native tribes like the Yanomami in Amazon, with the Mongols and Kazakh’s in the Altai Mountain, and several editions with the Shamans in Yakutia, Siberia.

She is working with analogue large format cameras.

During the period of 2005 to 2011 Cathleen Naundorf worked on a series titled; “Un rêve de mode ”, which focused on couture houses; CHANEL, Dior, Gaultier, Valentino, Saab, Lacroix and Philip Treacy. Thanks to her outstanding photographs, Cathleen Naundorf had the privileged access to these couturiers collections for her elaborate and cinematic productions for seven years. This very large work got published in “The Polaroids of Cathleen Naundorf “ Prestel 2012.

Since 2011 Cathleen Naundorf has been working privately with Mr. Valentino Garavani on several projects, like “An Italian story” and “The NY City ballet”.

The Museum Fotografiska in Stockholm exhibited her Master Photography under the title “Secret times ” in 2018, displayed 100 large-size photographs, her cameras, diaries and Set designs.

The 2018 publication of “Women of Singular beauty – CHANEL Haute Couture by Cathleen Naundorf” Rizzoli, celebrated over 15 years of Naundorf’s collaboration with the legendary fashion house CHANEL.

Naundorf’s work has been published in Harper’s Bazaar, National Geographic or Condé Nast. With her photographs being internationally collected and exhibited worldwide in galleries and museums.

Naundorf is living and working in Paris and London.